WHAT IT TAKES TO TAKE ON THE WORLD – AND WIN

WHAT IT TAKES TO TAKE ON THE WORLD – AND WIN 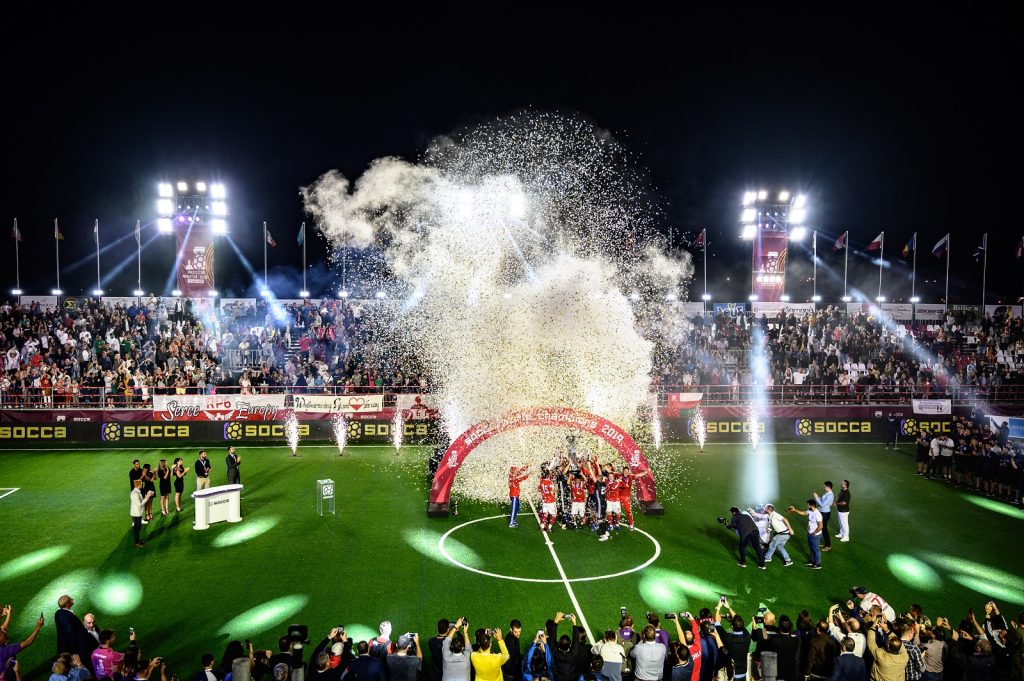 We are rightly proud of all Scotland, Wales and England achieved in the World Cup in 2020. Whether it was thrilling, attaching football, winning the Goal of the Tournament prize, or being involved in what was regarded as the Game of the Tournament, we more than played our part.

However, only a select few have taken on the world and won in any sport. They are rightly revered as legends in their own countries, they go down in history all over the world.

Only two teams have ever won the 6 a side World Cup. Germany in Lisbon, and Russia in Crete – on both occasions, Poland were the unlucky team – but no doubt the hurt will spur them on.

Now here, in a revealing, in depth interview, we get inside the mind of the coach of the Russian team, Dmitry Smirnov, who piloted them to the incredible success with his brother, Artem.

He talks revealingly about the plans the siblings came up with, the growth of Socca since they took their first steps in the sport, just what it meant to be part of the occasion at the Leisure Leagues Stadium on the banks of the Mediterranean, together with the tale of a dancer who used his hands to great effect. More, though, he explains just why winning the cup felt like a destiny he had to fulfil.

Congratulations on winning the 6 a side Football World Cup. What is your best memory of lifting that huge trophy in such an amazing setting?

Thanks. It was truly unforgettable. We were lucky enough to become winners. It was a massive success for our entire country. After all, this type of football has a huge audience in Russia, especially among people who play this sport themselves. But for Artem and me, this victory makes even more sense. After all, it happened in Greece, in Rethymno back in 2013, that we met Thanos and brought the Russian national team to the big international competition for the first time. That time we also showed a good level, didn’t lose matches. Still, in the end, we didn’t get medals because twice in a row, we were not lucky on penalties. Then, in 2013, in Rethymno, I swore to myself that I have to win this tournament. A lot of things changed after that moment, the number of participating teams has doubled, there are more strong competitors, and the task has become even more difficult. But we have achieved results, and I am glad that I was able to keep my word six years ago, and that is very symbolic, in exactly the same place.

You had an incredibly successful World Cup with your Player Rustan Ramazanov winning The Most Valuable Player Award and your goalkeeper Dennis Korshikov winning the Best GK Award. How did you discover these players and the rest of your very special team?

Minifootball  [the Eastern European word for 6 a side football] is very popular in our country. Let me give you an example: in just one Russian city, Moscow, LFL hosts more than 40,000 mini-football matches in a single year. But this type of football has massive support also in all cities in Russia. Since 2009, we have been holding the national championship among the strongest teams in Russia. Since 2016 we also organised the CFL – the biggest international club tournament in the world in 8-a-side football.  We have been holding our regular competitions since 1995. In total, more than 10,000 teams participate every year. Just because of this, we have the opportunity to select the best players in the country to show our power on the international level. We are glad that you evaluated the talent of our players. I want to note that neither Ramazanov nor Korshikov were professional footballers and have never played football professionally. Ramazanov is from Makhachkala, the Republic of Dagestan, in the South of Russia, he is a professional dancer of the national Corsican dance. Korshikov is working at a metal factory in the small town of Stary Oskol, Belgorod region. There are a lot of talented players in Russia, but we, the coaches of the national team, can only choose those who will go to the competition and prepare them for the matches.

You only had three yellow cards for the whole tournament and the referees team said your players were very well behaved. You have proven beyond all doubt that you can be world cup winners with great passion but still have great sportsman like conduct. What advice do you give your players in regards to their discipline and behaviour?

Despite the fact that our team this time almost did not have those who have a long professional career behind them, our team has always considered discipline to be the most crucial factor for success in such competitions. It is the position of the head coach. We have very strict discipline on and off the field. But I do not have to force them or ask for it for a long time, each of them understands that they did not come to the resort, but to represent their country at international competitions, and they are responsible for this. I only remind them of the truth: “self-Respect begins with respect for others.”

You certainly didn’t have an easy route to the final as you played some strong teams in the latter stages such as USA, Hungary and Greece. Who impressed you the most at this World Cup?

You’re right. It is something about our mentality, but we are used to it. As for the opponents, I would emphasise Hungary, Greece, and Moldova among the teams that were our rivals. They are all different, but each of them is strong. Of the teams we didn’t meet, England made an excellent impression.

The Greece Semi Final was a great game in front of a stadium full of home supporters. How did you keep your players so calm and focused playing in such an intimidating atmosphere and against the hosts?

We have our philosophy about this. We believe that playing with a full stadium, even when everyone is supporting our opponents is not a test, but a blessing. We are trying to enjoy every minute that fate has given us. Besides, our team has experience of such matches, when we won games in different stadiums with fans cheering against you. And of course, like any coach, I have my secrets on how to prepare the team for difficult matches.

Look out for part two on Friday, when the coach gets tactical, tells us which players he admires, and looks to the future.