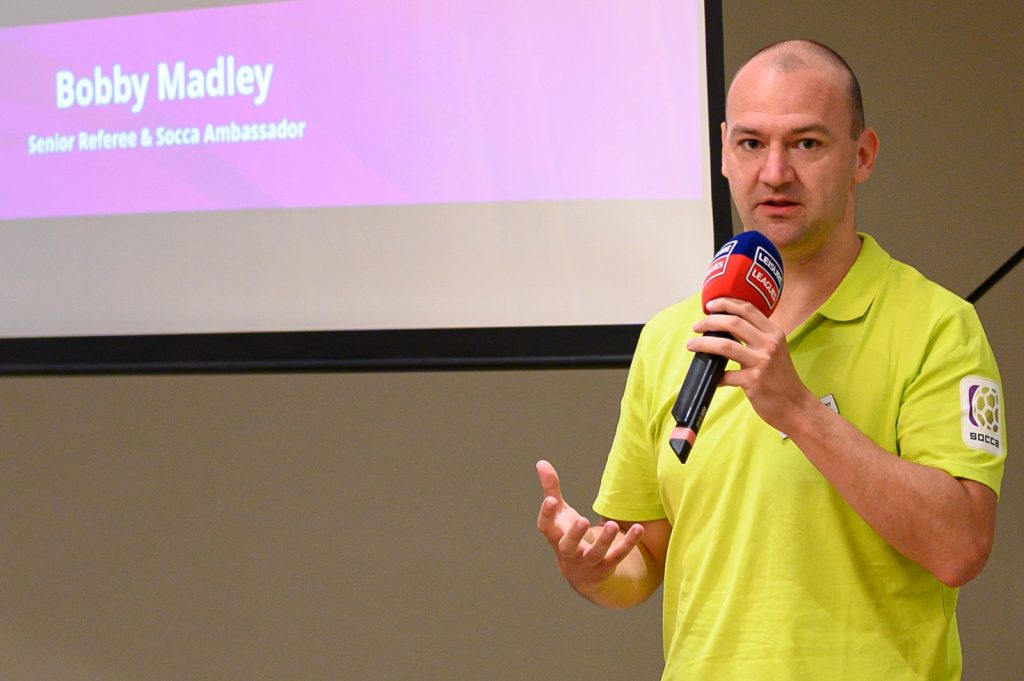 Bobby Madley, one of the International Socca Federation’s elite refereeing panel, has added his thoughts to the debate surrounding the behaviour of Manchester United’s players at the weekend, saying: “No referee should ever be made to feel threatened by a player.”

The Old Trafford club have this morning been charged with “failing to conduct themselves in an orderly fashion” by the FA, following a Roberto Firmino goal in the Liverpool v Manchester United  match on Sunday that was subsequently disallowed by VAR for a foul on David De Gea by Virgil Van Dyk.

However, in the aftermath, a number of United players – led by De Gea – surrounded referee Craig Pawson, with the Spaniard appearing to barge the official at one point. He was booked for his dissent, and Madley – who was one of the lead UK officials at the world cup, refereeing the final – agreed with the decision not to hand out a red card to the keeper, saying: “I felt the yellow was correct”.

The former PL official went on to explain why a harsher punishment was not required in this case: “That down to whether the referee felt the words or actions were offensive, insult or abusive or in physical contact terms whether it was violent conduct.”

He also lent his support to Pawson, adding: “I personally felt the referee managed this very well , however, clearly I don’t know what was said.”

But he was also quick to suggest that all instances should be taken on their own merits, and it was down to interpretation: “I think any referee who feels physically threatened has every right to show a red card,” considered the Yorkshireman, now living in Norway. “No referee should ever be made to feel that way by a player.”

The incident – and subsequent FA charge – has provoked a furious debate online and in the media, with some wondering why the yellow wasn’t rescinded when the decision was overturned by VAR, but Ref Support UK CEO, Martin Cassidy, who UK Socca are proud to work with, was dismayed at that view: “That is the attitude that is ruining football,” he exclaimed. “This “entitled’ attitude that the ref is a target just because they think he got a decision wrong is shameful.

Tom Nash, of UK Socca reiterated the “zero tolerance” approach the organisation has.  “Our stance is simple,” he stated. “We will simply not tolerate any behaviour of this type, and any player that threatens a referee, will be handed an immediate lifetime ban from any competition we administer.”

“Referees are the most important people we have, and it is vital that they are backed 100%.”

To join Leisure Leagues as a referee click here.

To see the work of Ref Support UK, click here: