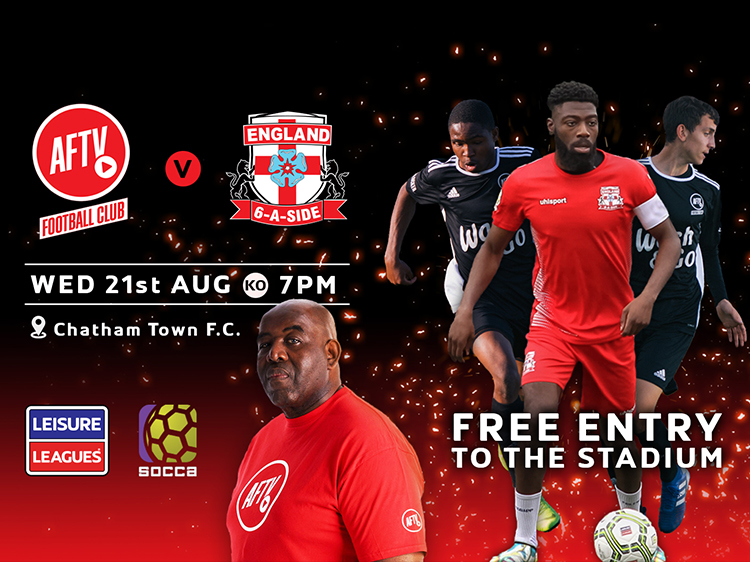 The England 6 a side Team continues their build up to the  ISF  6 a side World Cup, this Wednesday, as they take on AFTV in a very special game at one of our newest venues.

The England squad have accepted a challenge from AFTV to play at Chatham Town’s Bauvill Stadium, with the festivities getting under way on Wednesday night at 7pm , as they continue on the road to Crete.

Robbie and the boys will be there, as the home of controversial fan opinion meets the very best in 6 a side football for the first time.

The Bauvill Stadium’s brand new pitch is one of the  newest – and best –  6 a side venues in the country, with a Sunday Leisure Leagues competition in full swing, and it will soon be joined by a Monday night competition as part of their exclusive partnership with Chatham Town.

Our cameras will be on hand to film the event, with Andy Thorley, UK Socca Media saying: “It will be interesting to see if AFTV can walk it like they talk it. As a Stoke supporter, I have noted that they called my beloved Potters a “pub team” in the past. I will be watching the score with interest, trust me.”

England’s vice-captain Daniel Beszant is one of a few players that have played for both teams, meaning rivalry will be fierce.

The real stuff kicks off in October, as England, Scotland, Wales and Ireland  – all including Leisure Leagues players in their ranks – head to Crete.

For more information on the game with AFTC, go here.

For more information on the Chatham leagues, go here.