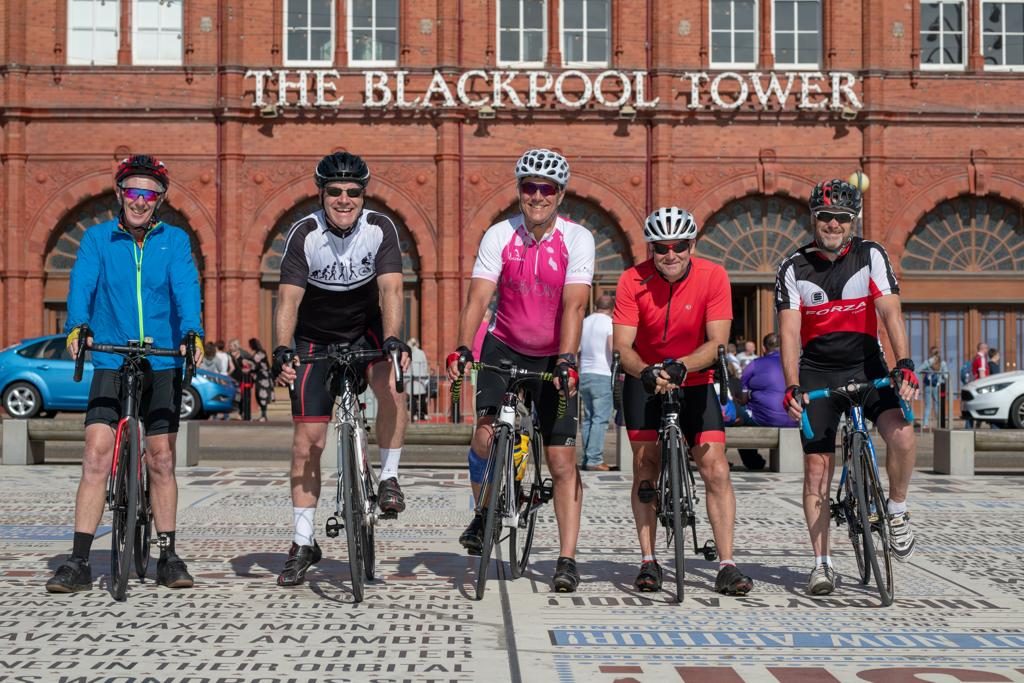 A distance of 877 kilometres, or 544 miles if you prefer, separates the Eiffel Tower from its Blackpool counterpart, but the ISF Medical Director, Richard Johnson and his team of intrepid fundraisers made short work of it as they raised money for great causes.

As you may know, Dr Johnson, who as well as being the senior ISF Physician is   Clinical Director and Senior Surgeon at the Princess of Wales Hospital in Bridgend undertook the Tower To Tower challenge in aid of the wonderful Molly Olly’s Wishes charity, as well as Breast Cancer UK, to aid their brilliant work – and as it stands they have raised over £1000.

The ISF, UK Socca and Leisure Leagues all provided logistical support to the trip, and one of the LL vans was the main support vehicle for the adventure.

He was  joined by his brother Michael – who organised the trip to coincide with his 50th birthday – and friends Michael Brace from Bridgend, Richard Onions from Portsmouth,  Phil Rotheram and Barry Young from Chesterfield, as well as the Molly Olly’s mascot, lion, Olly The Brave. The lion forms part of an Olly the Brave pack that has now been handed out to 40 hospitals, across the UK along with a book from its exclusive Olly The Brave series.

The Doc was still exhausted when we spoke to him, as he said: “I am delighted to have done it, there were a couple of tough days, but we did it and that’s the main thing.”

Richard was assisted by his brother, who had to change the route on one occasion, as he explained: “It got a bit dangerous on the roads around Heathrow to Aylesbury” he recalled. “There were a lot of idiots on the road! But we re-routed and it was all fine after that.”

Other than that, the big issue was weather. Headwinds and crosswinds, specifically. “There was a 15 mile an hour headwind in Newhaven,” said Richard, before adding: “that and the crosswinds made for a tough spell.”

When they got to the Midlands, the team swelled by one with ISF President Tim Ollerenshaw joining the ride, and Richard smiled when he said: “That was actually the toughest stage! I am sure Tim thinks we’re being overly kind to him, but we really aren’t. The stage from Atherstone to Macclesfield really was the toughest.”

Geographical issues notwithstanding, the kit all held up fantastically. “It was staggering how trouble free it all was,” Richard confirmed. “There were no punctures and only one broken spoke. That’s unheard of, really.”

One thing Dr. Johnson hasn’t done since he got back was get back in the saddle. “I have not even thought about getting back on a bike!” he laughed. “But I will. Last time I did a big ride I did I probably left it too long. I won’t do that again!”

The only question that the surgeon refused to answer was this one: “What’s next then?” He laughed and said: “Let me recover from this one, first!” In a manner that suggested he wouldn’t be long before he was back out again thinking of the next challenge.

Although the ride has ended, Richard is still gratefully receiving donations for his chosen charities.

Please give what you can on: Donations can be made at: https://uk.virginmoneygiving.com/RichardJohnson28