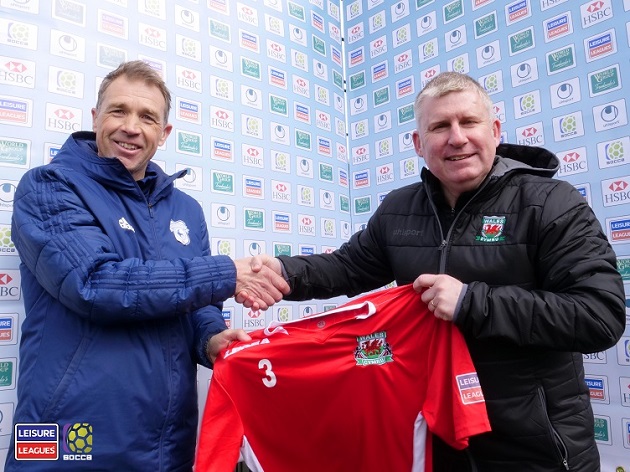 Players from the Leisure Leagues Bridgend leagues got a wonderful opportunity to improve their skills this past weekend, when some of them were part of the specially selected squad to receive coaching from former Welsh International, Andy Legg.

The session took place under the watchful gaze of Wales 6 a side manager – and Leisure Leagues stalwart – Barry John, and saw players who are looking to represent their country in the 6 a side world cup this autumn able to tap into the knowledge that only being a top footballer can bring.

Legg, who rose from non-league himself to hit the heights of playing 6 a times for his country, was full of advice for the players and said: “I told them they’d just got to enjoy it. They’re representing their country, so its an honour….but we don’t like losing!” he joked. “They’ve just got to enjoy it.”

Keiran Miller – Leisure Leagues player and a veteran of many campaigns for the Red Dragons – admitted he had gained a lot from the experience: “It’s been brilliant,” he enthused.

Another player in Leisure Leagues, Luke Jones, echoed those thoughts, but also pointed out: “I am immensely proud to play for my country, and I’ll be warming up for Crete with plenty of 6 a sides. I play a couple of times a week and to be given these opportunities is amazing.”

Coach Barry John was quick to praise the roll that Leisure Leagues played, saying: “The benefit of 6 a side is that it gives an opportunity to everybody. If somebody has got a chances of representing their country, through Leisure Leagues, that is fantastic.”